Compiled and written by @miss_qiak for @EnglishTips4U on Sunday, July 24, 2016

Today we have a quiz for you. It’s an easy quiz though. You just need to spot the mistakes in 10 sentences. The number at the end of the sentences indicating the total mistakes in them. See this example:

I am students. (1) <- The number in the bracket shows that there’s one mistake.

Answer: I am a student.

Compiled and written by @wisznu at @EnglishTips4u on Thursday, November 19, 2015

So.. let’s discuss something fun today :) Does anyone know the Mr Bean episode when he went to the launderette (doing laundry)?

If you haven’t you can watch it here:

“@MHErSYA: yesss I know that part”

Glad some of you know that Mr. Bean episode XD He actually drank a softener (pelembut). Ya, that part, jangan ditiru!

In Indonesia we know that laundry is a place where we can bring our clothes to be washed by someone. While somewhere like the UK, a launderette is still commonly used and we do the laundry by ourselves. Just like what Mr. Bean is doing in this episode.

(Those who are going to study in the UK & going to live in a campus accommodation, you better be ready to go to the launderette :D)

Fun fact: Since I am in the UK and I do use the launderette to wash my clothes – sometimes I would explain to Indonesian friends that I do laundry like Mr. Bean :D

But there are more fun facts were found by doing laundry and here we can discuss more about it if you wish :)

As socks are smaller than any of the other clothing, there might be a chance that it was left out, slipped or fell when moved from the washing machine to the dryer.

So here are some jokes that I found about it

To those who are single (and there are lots of these)

“Clean. Single. Looking for a mate.”

In launderettes you would find irons and ironing boards. So this one: iron vs wrinkle

Dryer functions to dry our wet clothes straight away. So here is dryer vs wrinkle..and weight?

So what you do you guys think?

That’s it for today fellas! Hope you had fun in this #EngTalk and have new jokes to share :)

And guess what I found in my launderette today..

They should spell “iron” better next time :) … G’nite!

Compiled and written by @iisumarni at @EnglishTips4U  on Thursday, September 12, 2013

A grammatical error can change the meaning and leave a bad impression.

Today I want to share some pictures to show you why grammar is important! Let’s roll!

Comma is our language’s great organizer, our most familiar – and commonly misused – punctuation mark. :) 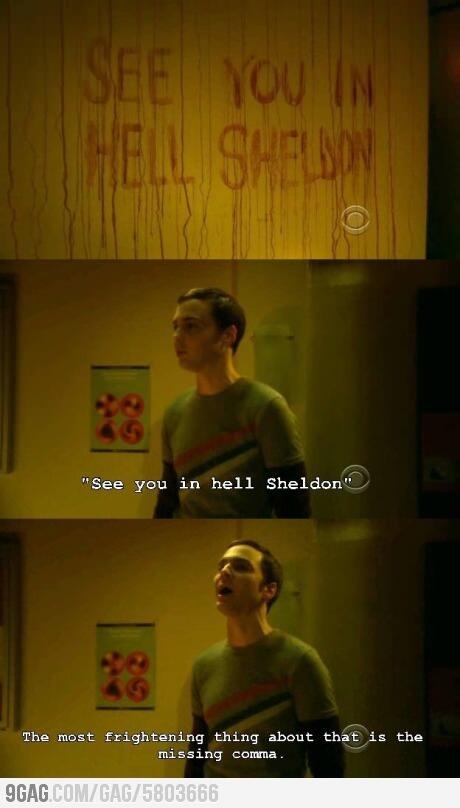 Their, they’re, there. Enough said. 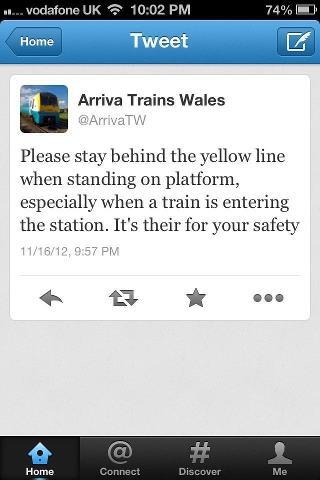 Again, it is our beloved comma! Hehehe…

Please double-check your grammar before being a grammar nazi. 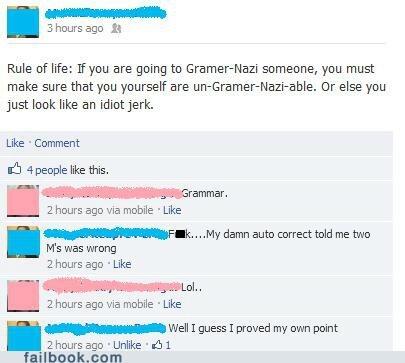 Ummm… A cannibal and a dog eater?? 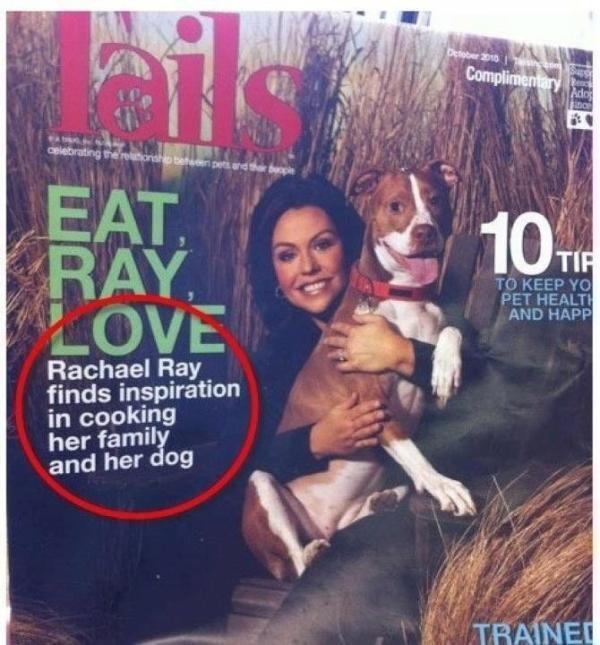 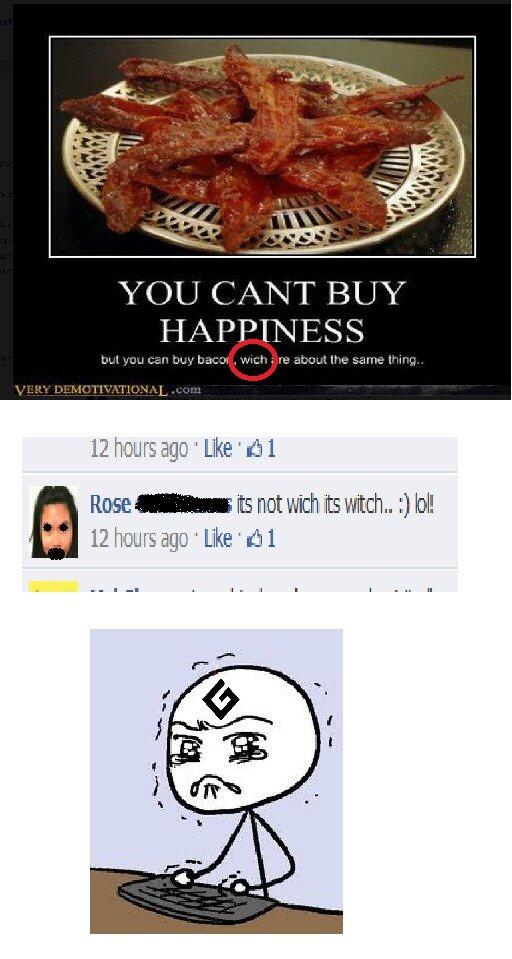 Again, double-check your grammar before making a tattoo. 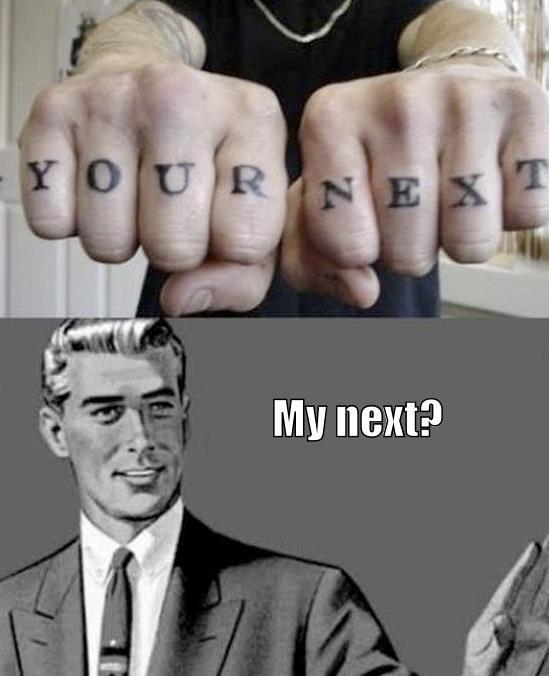 The difference between then and than is very important. 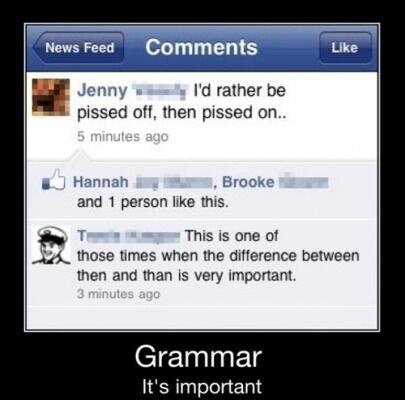 Is this a secret grammar test? 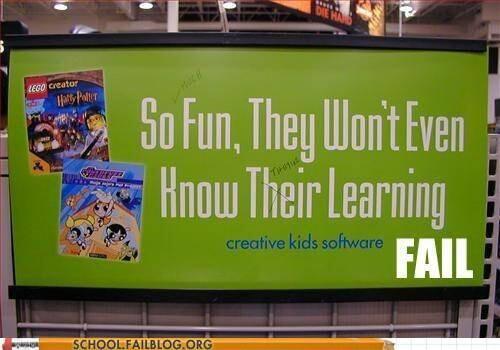 Could you smile after you read the message? 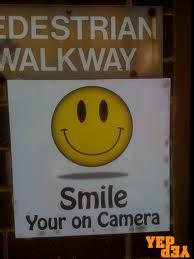 There is no doubt that improving your understanding of grammar & punctuation is very useful. Good punctuation & grammar will make you look more professional and make your arguments more persuasive.

Hello fellas.. How are you? How’s your end of April 2013? Hot enough? Do you want to play a poem #EngGame this evening? :D

Fellas have to continue it and had to rhyme with the last word of the previous sentence :) At some point it could be the admin

The best sentence picked will be the continuing sentences, we will stop at 10th sentence, how does that sound?

Great! The sentence you make can be as random as you can! But still makes sense and no rude words, please :) Let’s start!

(You can start continuing it fellas! Make sure it rhymes with the last word :))

2. @Rharrys: I’m looking for my cat for all I see is only a scarecrow

(Now make a sentence that rhymes with “scarecrow”… oooooooo)

4. Calm my dear and I’ll lead you, the bow seemed to talk to me

(Now continue the 4th sentence which rhymes with “me” :))

5. @ririrosyidah: don’t take it, or the sky will look so gloomy

(Continue it rhyming with “gloomy” fellas :) I’m going to pick fellas contribution for sentence 6 and 7, before I reveal the 8th)

7. @pottract: I’ve got to stop before I hurt my tummy

8. I said “NO!” to the bow and throw it to an approaching shadow

9. @amalianadiene: i saw a unicorn passing through my window

10. @peppyispeppy: enjoy your life and let it flow

So what do you think fellas? Hard? Weird? Confused? :D

@13njet: Li’l bit confused at first. Haha <- But you did good!! Everyone did good!! Was hard to choose actually :)

@anggastanadia: if you read all 10 sentences, it makes a weird story haha :p  <- That’s sort of the aim XD it’s a poem #EngGame after all :D

@putrajakarta: give us the theme so it’s gonna be easier… For example: love, friendship, death, etc < – Good idea! :D Thanks! Will note it!

The seminar took place as we were invited by The Committee of Eversities President University Major Association International Relations on Monday, 22nd October 2012. Sadly only one admin could come and give the talk when there should be seven of us hehe. We would like to thank you for those inviting us as guest speaker and welcomed us warmly during the event :)

After some speeches from the Vice Rector III and Head of Project, Johnathan Davy, Admin Vitri (@daedonghae), representing @EnglishTips4U, discussed about why English is important, a glimpse of Etifoyu history, how to have fun with English, a video showing, games also usual Q&As occurred.

In general, any language is important in our lives as it is the one thing used to communicate yet English somehow became the most important one specifically internationally used. It became a universal language in our life for centuries now.

However, it is always not easy to learn any other language than your native language and that applies to anyone in the world.

Well learning English in a fun way is one of the things that @EnglishTips4U have done so far. We also encouraged everyone, between admins and followers, to share and have fun with English language itself using Twitter portal and different categories of sessions.

Sometimes abbreviated to the word “etifoyu”, @EnglishTips4U is a non-profit English learning portal and Twitter based also the first in Indonesia. It was created by Retno Sofyaniek (@NenoNeno), an English Teacher currently living in Denpasar, Bali. Our motto is “We help you learn English better, faster, and for free!” administrated by seven admins in Denpasar, Bali and Jakarta. Our purpose to help our followers which we call them ‘fellas’ learning English Language in a much simpler, effective and quicker way by kultwit or twitter lecturing through interactions.

Here are some fellas’ testimonials shared about us shown in the seminar:

It seems that we have reached our purpose and we’re really thankful that fellas like what we do. And yes even admin also wish schools taught us like this. But who knows in the future, and of course most likely not our generation now or maybe our generation English can be taught in a fun way instead of serious way. @EnglishTips4U always wants to encourage sharing because we and admin personally think sharing and discussion is always the best way in learning especially in this era where in twitter you just gather whoever you are, no matter where you from, it’s the globalisation era after all.

Some other ways to learn English in a fun way could be these options. Mind you, even though we are all adults, we have to beware of foul languages. Just be careful in using it. In Indonesia itself, people use it very often but admin is not sure if they do even understand what the meaning is. Admin is sure they wouldn’t care, but it is important to know when and where to use it.

After a slide show of this, admin showed a video that a fella shared in one of our sessions which is called “History of English in 10 minutes” of how English have evolved until now – youtube link: http://www.youtube.com/watch?v=rexKqvgPVuA

A number of activities occurred after the video and break. Firstly, audiences or participants had to answer these two big questions:

1) Why do you think English is important for you?

2) How do you make English fun as part of your own learning?

Above: two people came up to answer the two questions, the miming game

Below: the questioners in the Q&A section

Two people were brave to come up and state their answers. Here are some answers that you have shared (sorry we couldn’t fit all in, there were so many but we thank you for your participation :) ):

Next activity was the Q&A session where audiences get to ask admin. Here’s the summary:

Q1. From Devi: “I’m scared no one understands my accent, what should I do?”

Answer: Admin would suggest to just be yourself, be confident about it as no one has ever had same accents after all.

Q2. From Anggun: “Will there be Indonesian English or IndoEnglish knowing from the video it stated there are singlish, chinese english etc?”

Answer:  It’s possible and I have talked it during one of our #EngTalk sessions which came up with some interesting ideas about it.

Q3. From Isti: “What’s the best way to teach English to children? As I struggled and have tried books.”

Q4. From Bill: “If we speak English some people would go ‘sok banget pake b.inggris’”

Answer: I was never in that kind of situation but what you can do is explain and if still ignored then ignore it and let it be. I would add here that, people shouldn’t be jealous of what language we are using. Language is universal and there are hundreds or even thousands of languages in this world. Would you stop a bule from speaking Indonesian? I bet you’re proud to hear them speaking our language right? Well maybe a bit worrying too, but that’s just someone jealous of you probably if they dare to state such thing and you shouldn’t be down about it.

Answer: It is because of my background moving around with my family but later on I liked it and I thought it’s the easiest second language to learn compared to other second languages that are ‘demanding’ these days.

The last part of the interaction was a mime game. As no one wants to volunteer, the MC picked one of her juniors to participate :) You can see the on the compilation picture above, on the right upper side, that he was really funny :) In here you get to mime a sentence of what they think of the seminar and the rest of the audience had to answer it.

@EnglishTips4U would like to thank the committee, the university and the participants once again for inviting us and letting us being the guest speaker :) It is such an honour! Also we would like to thank you Yanti @yantiyanto for helping documenting and as guest admin throughout event :D We hope to see you all again :D

Compiled and written by @ChatrineYK at @EnglishTips4U on Thursday, March 8, 2012

Compiled and written by @Patipatigulipat at @EnglishTips4U on Saturday, December 31, 2011