Who here is a Harry Potter fan? Even though the books and movies were all released, except for the Fantastic Beasts, I’m feeling a little flashback to Hogwarts. We are sharing some slang used on Harry Potter books.

“Bloody hell!”
We know this one to be used a lot by Ron. It is a common expression in Britain, Australia, and New Zealand. It could express a lot, from surprise to disgust to anger, etc. 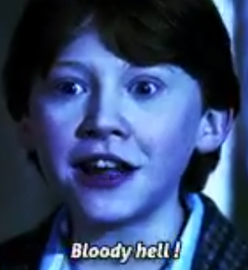 “Bollocks!”
This is a word we should not use carelessly, as it means male genitalia parts. However, it’s used in the same way as ‘nonsense.’

“Git.”
Somewhat derogatory, git is used to describe a foolish person. Hagrid used it once to refer to Mr Filch.

“Peckish.”
The feeling of small hunger, wanting to eat but not quite hungry yet.

“Snog.”
To kiss passionately, to make out.

Feel free to add more on the comment section below!

One thought on “#UKSlang: Slang in Harry Potter Books”