Graffiti or a mural might not be a good thing for some, but how many times have you found it grammatically wrong?

So today’s #EngPic is the good grammar graffiti/mural session and why not try answer the questions along with it :)

1. Always Living in Harmony – why not “always live in harmony”? 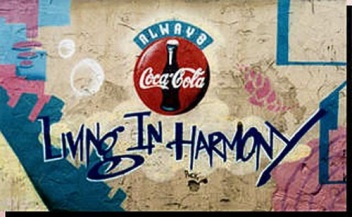 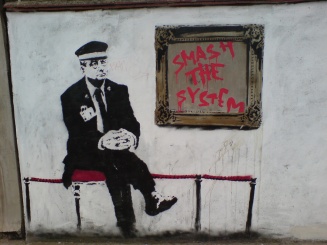 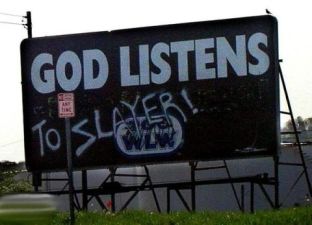 So I think they are all grammatically right… but what do you think? Can you answer the questions, fellas? :)

Thank you for answering fellas :) I got all the answers now! Let’s see what fellas have to say :D

A1.”@Ajannaka: because living is gerund as a subject.”Always living in harmony” is a phrase. Using “live” would need a subject.”

A2. “@AstriSusianti: Stop is a verb that is usually followed by gerund.”

A2. “@CepriMaulana: because after stop must be followed by gerund, right?” Yes, you’re right :)

A2. “@IzazakiaPutra: because double verb is not allowed to occur in English grammar since it’s unfit”

A3. “@oneworldwill: they use “smash’ means to destroy something. Smash is more make sense.”

A3. “@oneworldwill: maybe because “crash” means to collide with something…”

A4. “@oneworldwill: keep is always followed by GERUND if it means doing something continuously not store or save them.”

A4. “@ChatrineClarisa: because keep and smile are both infinitive and they can’t be combined. So change “smile” into a gerund.”

A5. “@_mommymemo_: cause GOD belongs to the third singular person so must using es/s in their verb.. :D”

A5. “@fitri_anita: because subject is singular, so the verb should be added by “-s/-es””

Well done fellas for your contributions :) They are so helpful and I hope this #EngPic session has been helpful too! I hope you had fun :D

@ChatrineClarisa: @fyulinanto smile is a verb, not a noun. So we have to change it into a gerund to use it as a noun .

<- “Smile” can be a noun as well but in this case “smile” is not a noun following the word “keep” @fyulinanto@ChatrineClarisa. PS: Mau tahu lebih banyak tentang “Keep Smiling”? Cek sesi tgl 28/04 kami bersama @KenalLinguistik :)#EngQAs